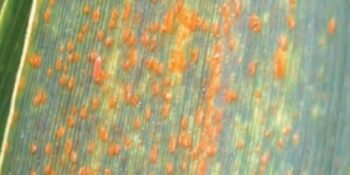 Puccinia triticina is specific to wheat. Other pathotypes can affect barley, rye and triticale.

Brown rust (Puccinia triticina) is a foliar pathogen of wheat and initiates disease by many cycles of airborne uredospores, particularly in the spring. It is favoured by warmer conditions compared to yellow rust and tends to develop later in the summer than yellow rust, during warm, humid spells of weather.

The disease is more prevalent in the south and east of England due to the relatively warm and dry conditions. Mild winters and dry springs favour severe epidemics as more spores are produced and dispersed, particularly because dry conditions in spring are usually associated with dew at night, which allows infection. 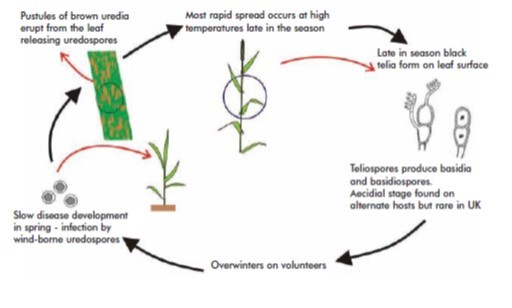 Brown rust can be seen in th autumn months on early sown crops, the disease is identifiable by orange/brown pustules. During the later months brown rust develops in a random formation which is digusinshable from yellow rust which develops in stripes. Whilst most commonly seen on the leaves brown rust can also be found on the stems and glumes of the plant.

Varietal resistance offers an effective method to manage the disease. Use the AHDB Recommended List – scroll to page 10 and 11 to check the current resistance rating of varieties (this has a 1-9 scale, where 9 represents good resistance and 1 represents extreme susceptibility). Compared to yellow rust, there are fewer varieties available with good resistance (8 or 9) to brown rust. In addition, current news on development of new races of brown rust in regions of the UK can be seen using the AHDB UKCPVS site at: https://ahdb.org.uk/ukcpvs

Resistance ratings do not guarantee durability of resistance. New brown rust races can appear, so check all varieties for brown rust lesions.

Diversifying varieties can help reduce the risk of disease spread between varieties.

Yellow rust is an important economic disease of wheat. Often occurring more in the east of the UK and areas with mild winters and cool, damp summer weather. A good selection of resistant varieties and well-timed chemical applications can provide effective control of the disease and minimise losses.

Barley is the fourth most important cereal crop in the world, grown in more than 100 countries and used for animal feed, human food and the production of alcohol.

The Encyclopedia of Cereal Diseases

Wheat is the mostly wide grown crop in the UK. Nationally yields average around 8 t/ha/

Net blotch of barley (causal pathogens: Pyrenophora teres f. sp. teres (Net form); P. teres f.sp. maculata (spot form). Net blotch affects a wide range of grasses, however, the forms on barley are specific to that crop and do not affect other crops.