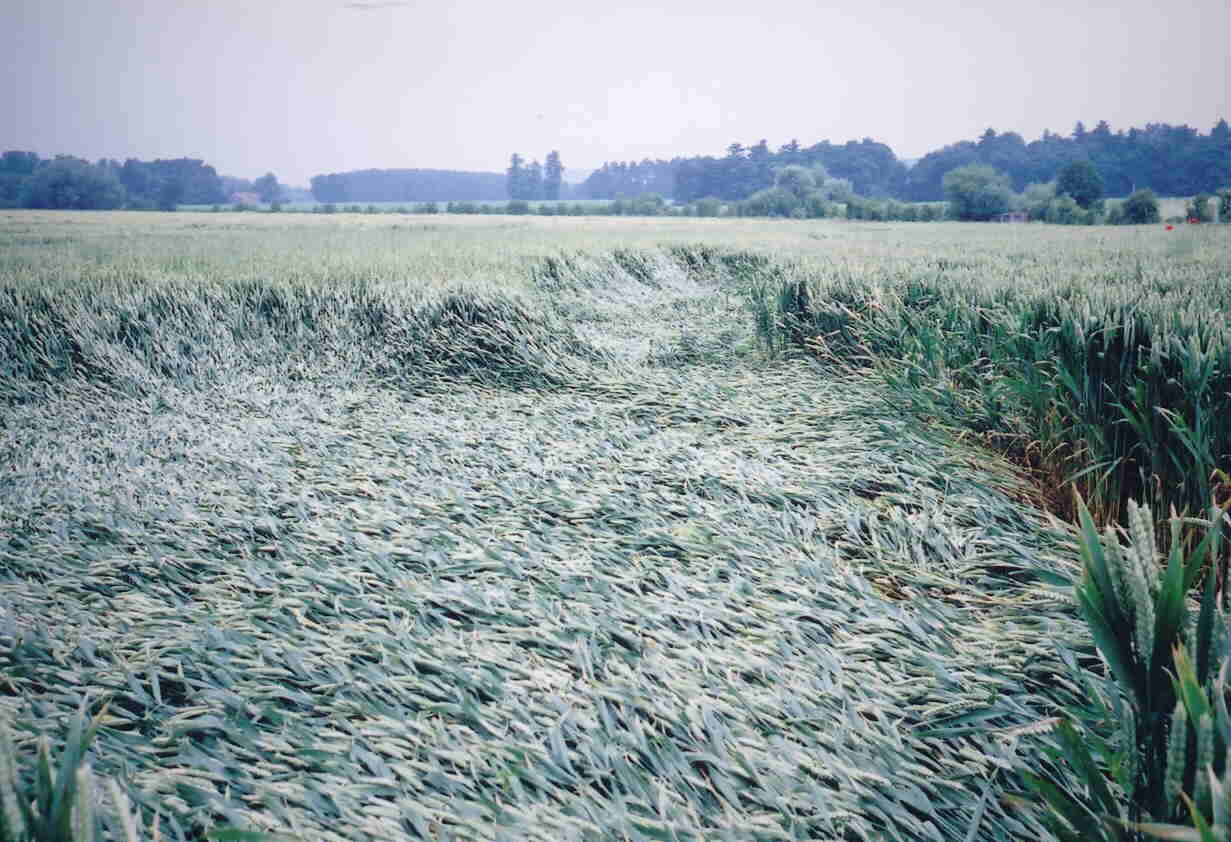 Lodging is the permanent displacement of plant stems from their vertical position and usually only occurs after flowering. It commonly occurs in many crop species including all cereals, oilseed rape, maize and sunflowers. Lodging can reduce yield by up to 80% and causes several knock-on effects including reduced crop quality, greater grain drying costs, and slower harvest. It is a problem that limits crop productivity in both developed and developing countries.

Lodging is the permanent displacement of cereal stems from their vertical position and usually only occurs after the ear or panicle has emerged. This can reduce yield by up to 80% and causes several knock-on effects including reduced grain quality, greater drying costs, and slower harvest. It is a problem that limits cereal productivity in both developed and developing countries.

Lodging is a complicated phenomenon that is influenced by many factors including wind, rain, topography, soil type, previous crop, husbandry, and disease. It is frequently associated with conditions that promote plant growth such as an abundant supply of nutrients. Significant progress was made during the 1950s, 1960s, and 1970s to reduce lodging risk by the introduction of semidwarf varieties. These shorter varieties had a greater lodging resistance and could respond to greater amounts of fertilizers. For these reasons the introduction of semidwarf varieties was one of the most significant reasons for the steady improvement in grain yields starting in the late 1960s, which has resulted in cereal yields increasing by as much as 1 t/ha per decade in western Europe and 0.5 t ha in many American and Asian countries [1]. The continued improvement in yields in some countries has been significantly aided by the use of plant growth regulators (PGRs) that further reduce crop height making cereals even more resistant to lodging. Four major types of PGRs have been introduced including chlormequat chloride during the mid-1960s, ethephon during the late 1980s, trinexapac-ethyl during the mid-1990s, and prohexadione-calcium in the 2000s. In France, Germany, and the UK, which have among the highest cereal yields in the world, PGRs are now applied to more than 70% of wheat area (Rademacher, pers. comm.).

Dwarfing genes and PGRs have been very effective tools for reducing lodging risk and maintaining steady improvements in yield. However, they have not eradicated lodging, and there is evidence that farmers will not be able to rely on these tools for further reductions in lodging risk in order to counter the escalating lodging risk resulting from continued yield increases. Several studies have shown that yield is reduced when crops are shortened too much [2–7]. The reduction in yield appears to be exacerbated by high temperatures or drought stress. Several of these studies indicate that the minimum crop height for optimum yield lies between 0.7 m and 1.0 m. Many modern varieties are already within this height range. While there is scope for further shortening with PGRs through sequential applications, pressure may be brought to bear to reduce their use because some PGRs leave residues in the grain [8]. It is therefore clear that new methods of improving lodging resistance in cereals must be developed.

During the 1990s and 2000s, collaborative studies by biologists and engineers have elucidated
the mechanisms of lodging in cereals [9]. Crucially it has been demonstrated that lodging may occur by two mechanisms: stem lodging and root lodging. These studies have culminated in models of the lodging process which help to understand how the plant interacts with its environment during the lodging process and identifies the most important plant traits that must be targeted to improve lodging resistance. Several studies have also explained how variety, sowing
date, seed rate, nitrogen fertilizer, and PGRs affect lodging. This improved understanding offers the prospect of designing a lodging-proof ideotype for cereals which may be achieved through a combination of crop management and plant breeding. This entry on lodging resistance in cereals describes (1) the impact that lodging in different cereal species has on crop yield and grain quality, (2) the mechanisms of the lodging process, (3) the effect of cultivar choice and crop management on lodging resistance, and (4) the prospects for improving lodging resistance. This entry is intended to be a concise summary of the most important aspects of lodging resistance in cereals, and for a more comprehensive review, readers are directed to Berry et al. (2004) [10].

Plant growth regulators (PGRs) are synthetic compounds which can be used to reduce lodging in several crop species.

A summary of lodging resistance in cereals is described in