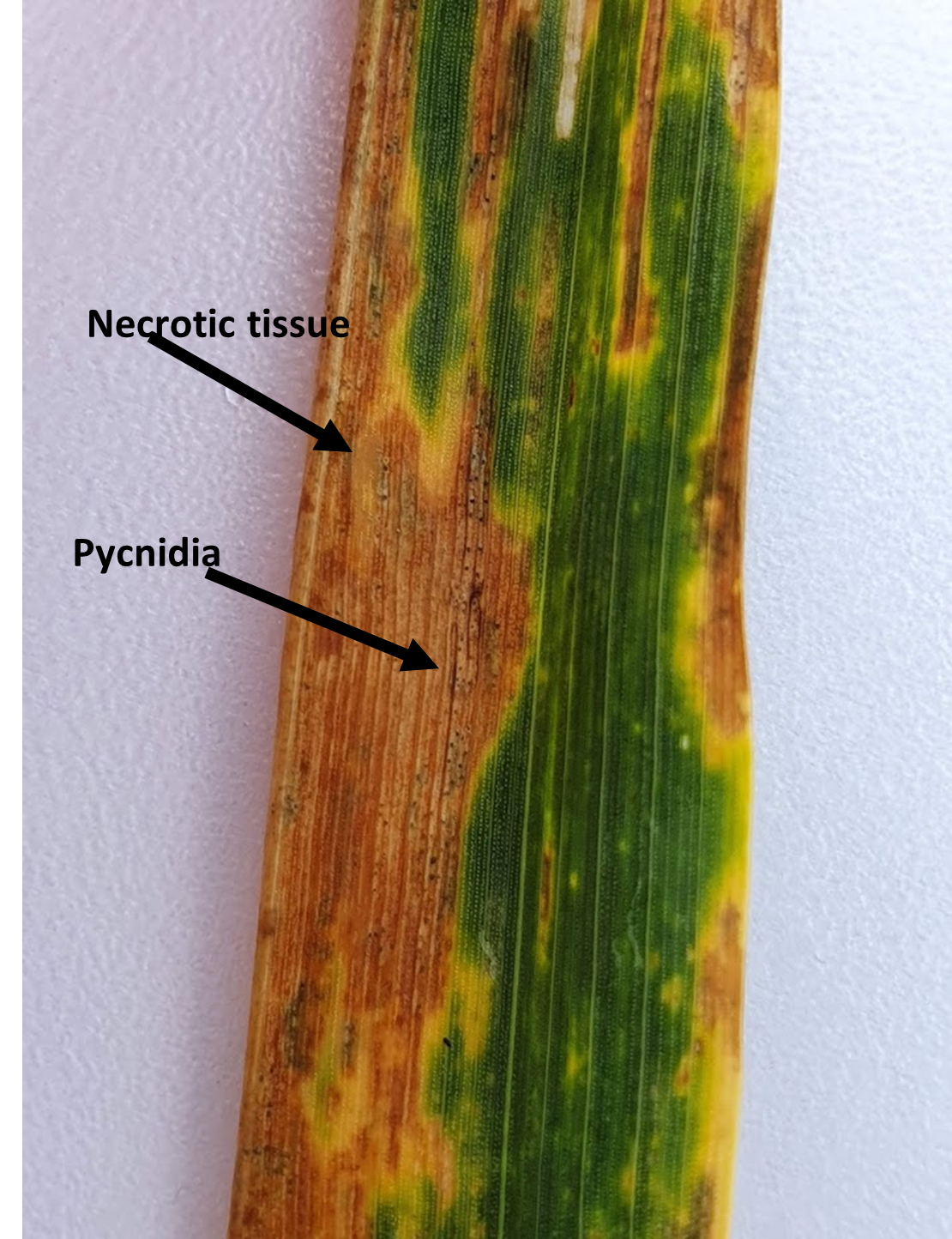 Commonly known as Septoria or Septoria leaf blotch, this is the most damaging foliar disease in the UK for Winter Wheat.

With a carefully constructed fungicide programme and use of Integrated Pest Management (IPM), disease pressure can be managed and losses greatly reduced.

Septoria leaf blotch is the most important foliar disease of wheat in the UK, with losses of up to 50% being reported in some crops. It is caused by Zymoseptoria tritici (also known by the previous name for the asexual-stage, Septoria tritici). The disease is initiated by wind dispersed ascospores, which are released continually from crop debris, in the autumn to early winter and again in late spring-early summer. The disease is also dispersed onto surrounding leaves by rain splashed conidia (asexually-produced spores), making it more prevalent in wetter areas of the country where it is continually exposed to infection.

Infection of the top three leaves (leaves 3, 2 and the flag) in the late season is where the most negative impact occurs, due to necrotic lesions limiting the plant’s photosynthetic ability, impairing grain development and subsequently yield.

Wheat is the main host of Z. tritici but it can also infect rye, triticale and some grass species.

The pathogen overwinters on crop debris, autumn sown crops and volunteers as dormant mycelium, pycnidia and pseudothecia. The disease is initiated by wind dispersed ascospores, which are released continually from crop debris, in the autumn to early winter and again in late spring-early summer. In addition, the disease is intensified and dispersed onto newly emerging leaf layers by rain-splashed conidia (asexually-produced spores). This means that the crop is continually exposed to infection, except during dry periods when both types of the spores are unable to infect successfully.

Lesions are restricted to the leaf veins, giving a rectangular appearance. Typically starting with a yellowing appearance, this then becomes necrotic and brown as the leaf starts to die. Mature lesions contain characteristic black fruiting bodies (pycnidia) as can be seen in the photo above, but these are not always seen in immature lesions.

Fungicides are required to have effective control of Z. tritici. Studies assessing the economics and effectiveness of fungicide applications over different growth stages have found the best strategy is to protect the final three leaves (leaves 3, 2 and the flag leaf). This is mainly due to autumn or winter applications not being effective due to continual re-exposure of the crop to infection by either by rain splash or airborne spores. The T2 timing in a typical spray programme (targeting the flag leaf predominantly), is the most important as it reduces disease on the upper leaves, increasing green leaf area (GLA) and optimising yield and quality. T1s applied slightly earlier, can limit disease on the lower leaves with T0 applications rarely giving a yield benefit.

Generally, the efficacy of azole (DMI) fungicides has declined in the past ten years, but some are still effective if used at full label dose and when mixed with another mode of action (e.g. propiconazole and epoxiconazole). Efficacy of the multi-site SDHI fungicides has declined recently but some are effective if used a full label dose alone or mixed with an azole. Resistance is widespread to strobilurins and MBCs (e.g. carbendazim).

Other cultural controls for reducing disease pressure should be utilised prior to determining a spraying programme to reduce reliance on chemicals and further preserve their effectiveness. For example, selecting a variety from the AHDB Recommended List (see link below), with a high resistance rating will reduce yield losses and put less pressure on having a strict fungicide programme. However, the pathogen population is so diverse and well-dispersed that no current wheat varieties on the list are completely resistant. They range from resistance ratings of 4-8 on a 1-9 scale where 9 is completely resistant.

Some of the text on this page comes from Rothamsted's Croprotect web platform at https://croprotect.com/diseases/septoria-leaf-blotch. This page is also supported by funding from The British Society for Plant Pathology (BSPP).

Yellow rust is an important economic disease of wheat. Often occurring more in the east of the UK and areas with mild winters and cool, damp summer weather. A good selection of resistant varieties and well-timed chemical applications can provide effective control of the disease and minimise losses.

Rapid crop disease detection. SwiftDetect can reveal the level of disease in your crop even in the latent period, with results in 1 business day.

Crop profitability depends on maximising margins, rather than yield alone. Deciding on the optimum crop protection strategy in the spring requires judgement of the variety, its situation, and how yield affecting diseases can be controlled. ADAS with the support of the AHDB and the wider industry set up the first Fungicide Margin challenge in 2019. Since then a total of 10 trials have been carried out over 3 years, allowing entrants to pit innovative strategies against others, against an ADAS experts' programme and against an untreated crop in replicated plot trials. The aim being to achieve the highest margin over fungicide cost.

Cereal diseases affecting wheat, barley, oats, rye, triticale and maize can be caused by a variety of factors, including fungal, bacterial or viral infections, pests and insects, and environmental stress.

The Encyclopedia of Cereal Diseases

Wheat is the mostly wide grown crop in the UK. Nationally yields average around 8 t/ha/

Combining agronomy, variety and chemistry to maintain control of septoria tritici in wheat