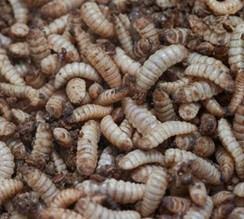 A combination of sustainability, health & animal welfare concerns are pushing a shift away from meat in our diets to alternative proteins.

As the global population grows, the world’s natural and finite resources are becoming increasingly strained. The United Nations estimate that world population is projected to reach 8.5 billion by 2030 and 9.7 billion by 2050 (United Nations, 2019). In order to provide enough food globally in line with a growing population, socio-economic changes, and measures to address the challenges of hunger, food insecurity and malnutrition; efficient and sustainable food production systems are required.

The average citizen typically consumes too much animal protein per capita in the UK and Europe, reaching levels that are unsustainable. Farmed animals play a pivotal role in the food production system, enabling the creation of food products for humans, often utilising materials that are otherwise unsuitable for direct human consumption.

The production of animal feed ingredients is competing with and utilising land that that could otherwise be used to produce other food crops for direct human consumption. Land use change for producing crops is taking land away from natural habitats and ecosystems that provide a wide range of environmental benefits. The production of soy is one example, with large quantities produced each year to provide feed for farmed animals.

A range of novel proteins is emerging (e.g. algal, bacterial, and yeast-derived) with the potential to displace conventional protein sources (e.g. fishmeal or soybean meal) for use in farmed animal feed. These have all sorts of innovative sources, from insect farms, to seaweed, microalgae and single-cell protein or microbial proteins (e.g. yeast, bacteria, fungi, and algae), as well as more conventional plant proteins (e.g. pea protein).

Insect protein is one alternative that has been acknowledged as having considerable potential for use in animal feed (for species such as e.g. chickens, pigs and salmon). Insect protein presents an opportunity to diversify, displace or replace some of the current protein needs of animals fulfilled by fishmeal and soybean meal. Not only can insects be farmed in relatively small spaces compared to other agricultural products, they offer the opportunity to utilise by-products that may otherwise be wasted, and farming can be conducted on nonagricultural land with fewer environmental consequences.

More than 2,000 insect species are considered edible, with most of these originating in tropical countries. The following species as those which are reported to have the ‘biggest potential’ to be used as food and feed in the EU, although it is unclear what factors contributed to making this assessment:

This is a rapidly developing area. We hope this page can help provide a hub to connect to relevant organisations, projects and resources (eg Cultivate-UK)

'Protein' is not all the same, and is not all good!   Proteins essentially contain reactive nitrogen which, after excretion (by whoever or whatever), has all sorts of undesirable consequences for our environments.  We would do well to reduce protein production (whether conventional or 'alternative') and focus on what is essential in diets (of whoever or whatever), which very often is just a few essential amino acids.  Essential amino acids are now available and widely used in livestock feeds, produced through highly sustainable fermentation systems (their main feedstocks are molasses and ammonia).  Let's not get too excited about eating insects (or indeed soybeans) until we're sure their production and their protein are essential.

Pulses are leguminous crops harvested for dry protein-rich seed, with peas (pisum sativum) and beans (vicia faba) being the major crops in the UK.

Legume is the commonly used name for the family of flowering plants, Fabaceae. Any plant in the Fabaceae family that has leaves, stems and pods are referred to as a Legume.

George Eustice has announced that there willl be £12.5M made available for research and developme

A roadmap for the future of the alternative protein sector in the UK.

Report by ADAS for Tesco and WWF on the potential for insects as an alternative protein.

We are CHAP, one of four UK Agri-Tech Innovation Centres. We bring together scientists, farmers, advisors and pioneers to advance crop productivity and yield around the world.

Field beans (vicia faba) are a widely grown break crop across the UK on around 170,000 ha.

Peas (pisum sativum) are grown either for combining dry seed (combining peas) or harvesting fresh as a vegetable or for freezing (vining peas).

TABLE is a global platform for knowledge synthesis, for reflective, critical thinking and for inclusive dialogue on debates about the future of food.

Following the TRUE and LegValue EU projects this LinkedIn group with over 100 members continues to share resources for those interested in legume crops,

The Future Of Protein Production

Connecting companies working to make the global protein system more sustainable, kind and fair for the planet, people, and animals.

The Good Food Institute Europe is an international NGO helping to build a more sustainable, secure and just food system by transforming meat production.  We work with scientists, businesses and policymakers to advance plant-based and cultivated meat – making them delicious, affordable and accessible across Europe.  By making meat from plants and cultivating it from cells, we can reduce the environmental impact of our food system, decrease the risk of zoonotic disease, and feed more people with fewer resources. GFI Europe is powered by philanthropy.

It’s worth reflecting on why we export most of the pulse crop we produce in the UK, or simply fee

Seaweed’s and macroalgae’s agricultural use could have a role in circularity, particularly in coa

Cultured meat - a threat or an opportunity for UK farmers?

Farming groups, scientists, and start-ups are teaming up to test how far cultured meat is a threat, or an opportunity, for UK farmers.

This Topic doesn't yet have a Stewarded summary, but connected groups, content and organisations show below. Click the 'Ask to Join' button if you would like to be a Steward for this Topic and provide a summary of current knowledge and recommend useful resources, organisations, networks and projects. "Like" this Topic if you would like to see it prioritised for providing a wikipedia style summary.   Branston are creating a potato derived protein product.

Black Soldier Fly (BSF) larvae are an alternative source of protein for animal feed, having an insatiable appetite consuming large amounts of organic material from both plants and animals. This ability, coupled with BSF feed conversion efficiency that compare favourably to fish meal and soybean meal, has led to an increased global interest in the development and adoption of BSF farming and BSF bioconversion technology.

Primed for power: a short cultural history of protein

The history of protein, from its 'discovery' and naming in 1838, is a story weaving science, nutritional politics, cultural attitudes to food, and much more. An understanding of this history is invaluable if we are to contextualise the current focus on protein that characterises discourses about health and sustainable food systems, and popular beliefs about fitness and nutrition. In this piece, Tamsin Blaxter and Tara Garnett from Table trace the history of protein from 1838 through to the end of the 'Protein fiasco' in 1974, discovering many echoes of the modern day.